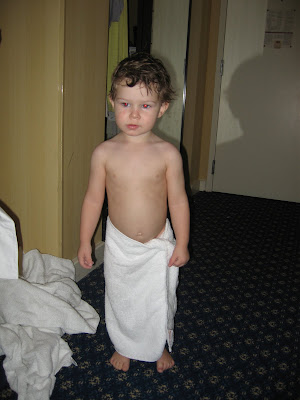 Matt loves to wear "his" towel which are the smaller hand towels and he likes to wear it like daddy:) he is so fun and is growing so much and learning so much.

the other day matt kept saying something and i couldnt understand him this doesnt happen all the time but enough and i usually can figure out what he's saying eventually. well i figured out he was saying baby einstein he wanted to watch his movie it sounds nothing like baby einstein so i was trying to help him to say it right by saying one word at a time as you can see he can say both but when you put the two words together it goes back to the original version. gotta love it :)

So. Cute!Miss you guys, maybe you'll be back here for a visit before we move to indiana??