boys will be boys 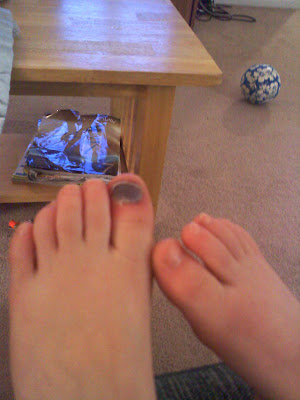 matt was playing with one of my weights today and dropped it on his toe it is now super purple and looks as though it will probably fall off. thinking he would think the idea of his toenail falling off would be cool i told him that (he did not think it was cool and freaked even more).

jacob is officially walking he will be 9 months on the 22nd. he has been taking steps for a few weeks now but opts to walk most of the time now and walks long distances so i figure he technically walked at 8 months but is officially walking at 8 months 3 weeks:) i cannot believe it those two get into soooo much trouble together already.( p.s. please dont mind the mess in the background it was laundry day and i hadnt folded it yet)
Posted by jamielynn at 5:00 PM