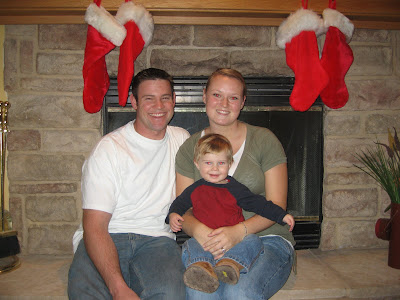 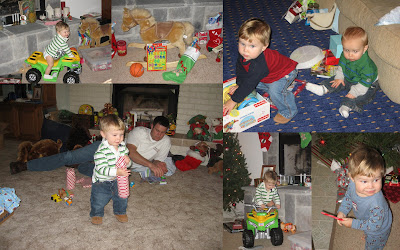 Merry Christmas to everyone!! hope you all had a wonderful one! we had so much fun with matt this year. Santa left him a rocking horse and it scared him a little because it makes noise:) but he warmed up to it. He loved his sock and of course as you can see he got a little quad he loves that mostly he climbes on it and pushes it around the house. one day it was nice and we took him outside on it and taped the button down for him and he thought that was the best thing ever!! he is such a boy;)

Posted by jamielynn at 9:54 AM No comments:

Matt loves to "drive" he gets so excited when you put him on your lap in the car and he gets to move the steering wheel! (while the car is in park obviously) he even goes as far as to try to move the shifter:) and now he has recently discovered how to make car noises (sort of). I took him to the outlet mall the other day and let him get in one of the cars he had so much fun he didn't want to leave and now gets sooo excited whenever he sees them. So today we were bored and went out to the outlet mall again and i decided to let him ride one:) that was, as you can see the best thing ever!!